DJ SET AT DO YOU DIY? AT THE OLD QUEENS HEAD 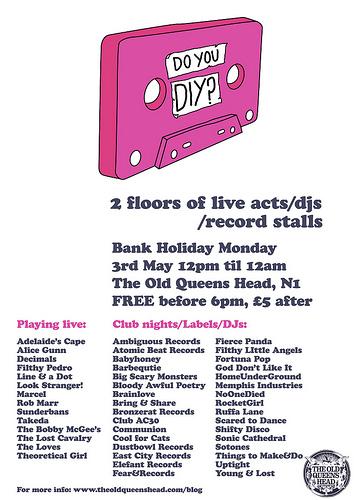 We’ll be guest DJing at the Do You DIY? all-dayer on Monday 3rd May at The Old Queens Head.

The day is a celebration of the DIY aesthetic with bands, blogs, independent labels and club nights involved. They’ll be record stalls and listening booths across both floors all day and the bill includes The Loves, The Bobby McGee’s and Theoretical Girl.

The DIY movement is about using anything you can get your hands on to shape your own cultural entity: your own version of whatever you think is missing in mainstream culture. You can produce your own zine, record an album, publish your own book – the enduring appeal of this movement is that anyone can be an artist or creator. The point is to get involved. Amy Spencer – DIY: The Rise of Lo-Fi Culture

It’s free entry before 6pm and just £5 after plus there will be fanzines on sale! We’ll be spinning tracks in-between bands and later on.

You can download a DIY sampler of some of the bands playing here.

1. The Loves – One Two Three
2. The Bobby McGee’s – Go Tiger Go
3. Line And A Dot – The Worst Thing You Could Do
4. Filthy Pedro And The Carthiginians – They Kicked Me Out Of Anglesey
5. Look, Stranger! – Shake Hands, Say Hello
6. Sunderbans – Roadkill
7. Adelaide’s Cape – Belle
8. The Lost Cavalry – Disappear