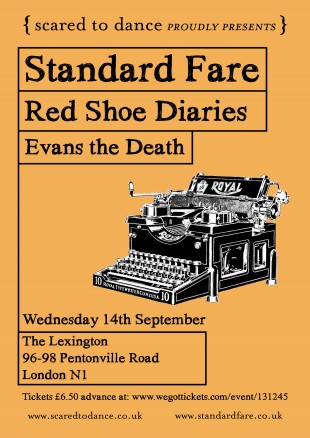 We are delighted to announce the debut Scared To Dance gig with Standard Fare headlining at The Lexington on Wednesday 14th September.

Support comes from Red Shoe Diaries and Evans the Death and you can get your tickets now from WeGotTickets.

Standard Fare had a great 2010 that saw the release of their critically acclaimed debut album The Noyelle Beat, festival appearances at Latitude, Indietracks, In the City and SWN and two US tours, including playing at SXSW. Hot on the heels of releasing the poptastic single “Suitcase” on Thee Sheffield Phonographic Corporation, we’re thrilled to have the Sheffield indiepoppers headline our premiere show.

Red Shoe Diaries are five friends from Nottingham who write pop songs for messed-up grown-ups. The band have built a reputation from playing with the likes of The Wave Pictures, Ballboy, Allo Darlin’ as well as numerous BBC radio sessions. One previous self-released EP has received much praise. Check out the outstanding When I Find My Heart… EP out now on Fika Recordings.

Evans the Death make frenetic and infectious punk pop which exudes the kind of unbridled charisma, intelligence, and runaway energy that promises a singularly exciting future for the band. With their compellingly unhinged and hyper-intelligent pop the band look set to blaze a trail through 2011 and beyond. The double A-sided single Threads/I’m So Unclean on Fortuna POP! is a must have.