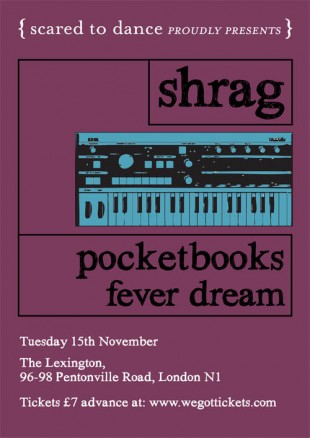 Scared To Dance presents Shrag at The Lexington on Tuesday 15th November.

Tickets are now on sale at WeGotTickets.

The band will be playing new material from their forthcoming third album tentatively titled Canines, scheduled to be released in the Spring on Where It’s At Is Where You Are and Fortuna POP!

Shrag put out one of our favourite LPs last year and we’ve been working hard on putting on this line-up for a long time so we’re delighted it’s all come together.

Support comes from Pocketbooks who released their second album Carousel yesterday so you can expect plenty of new songs from them. Completing the bill are Fever Dream who are earning rave reviews.