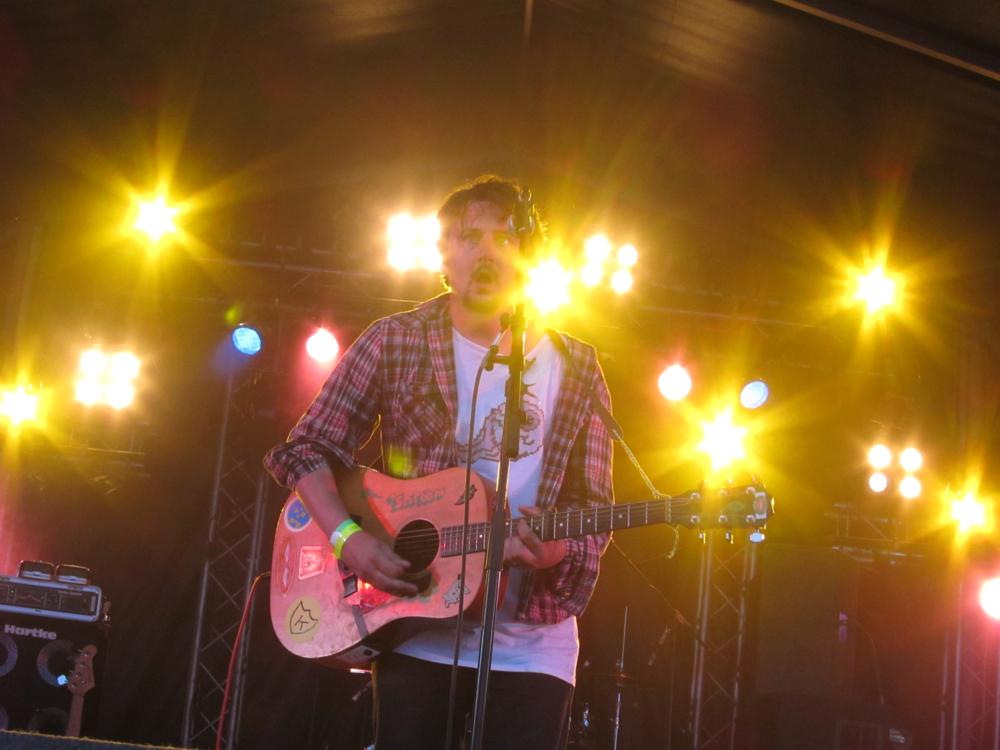 Last week we caught up with Dan Willson from Withered Hand ahead of his DJ set at the club on Saturday night.

We discussed his recent collaborations, plans for a second album, his songwriting and religion and sex. Here is the interview in full.

Hi Dan, we’re very much looking forward to your DJ set at the club. What sort of thing have you got planned?

“I guess I will just play a bunch of songs that I liked to dance about in my bedroom to and still grab me in some way. There will definitely be a late 90s bias.”

You’ve just come off the back of releasing a couple of EPs. How is work progressing towards a second album?

“Work is just starting on a new album. I have a cycle of new songs building for a while now that I am starting to bash into shape. I am not signed to a label at the moment so I am concentrating on getting the thing recorded myself and then will look at options after that.”

Are there any labels in particular that you would like to work with in putting your records out?

“Maybe. There is no real magic in the words ‘record deal’ for me, I just want to work with good people who are honest and believe in their artists more than they believe in money and fashion.”

How did your collaboration with Darren Hayman come about? (Hayman produced the Heart Heart and Inbetweens EPs in his London home last year).

“Those sessions were fun and came about through an invitation from Darren to go stay with him and try recording at his house with no particular outcome in mind. I think I am critical of my own previous recorded efforts and those sessions were another step closer to learning how to make things sound like they do in my head when I’m writing them. Darren is a very thoughtful guy, I have fond memories of that time and I hope to work with him again sometime.”

Do you see that in a producer/artist capacity or more of a musical collaboration either working on each other’s records or a joint release?

“I don’t know. I suppose that’s up to Darren too but certainly as a producer/artist again at some point. I think there’s still mileage in that.”

We enjoyed seeing you play at Fortuna POP’s Winter Sprinter a couple of weeks ago where you were joined by Pam Berry. You’ve said in the past that you were a fan of Black Tambourine. How did you come to work with Pam and has the artistic process worked out how you imagined it to?

“Oh, working with Pam is a joy. Same with Darren and King Creosote. It’s amazing to learn by working with people you admire. So yes I am a fan of Black Tambourine and I had been researching them and when I wrote something about them, Pam got in touch. They really nailed that exuberant noise/melody thing I so love. Pam turned out to be a fan of Withered Hand and I had a feeling we would get along so the next step was obvious. Pam’s really intuitive in her approach to singing and music, which suits me as I struggle when it comes to formal musical knowledge. I have a song on the new album which I wrote with her in mind to sing a vocal harmony.”

The Scottish Arts Council has helped many bands release their albums, Camera Obscura, Butcher Boy and The Felt Tips spring to mind. How much of a help were they in releasing Good News?

“They don’t actually really help you ‘release’ anything but at that time they were very good at helping match-fund recording projects. So you raise a pretty hefty amount towards recording, then they will match it with a percentage of that amount. I don’t know if that’s still the same but I imagine it is similar. I was very lucky to get that help but the hideous form I had to fill out more than justified it. The Scottish Arts Council became Creative Scotland though; I hope they can carry on supporting the various new music scenes in Scotland through these challenging times.”

Religion and sex have been recurring themes in your songwriting. Has that been a deliberate topic or something more subconscious, that rejection of religion?

“I would say it is more the product of introspection. Certain times in my early life were preoccupying my mind when I first became a father and that is when those songs were made. If that is deliberate then it is. I mean I didn’t write them in some kind of trance. But if anything I have tried to suppress those same introspective themes when they try and make cameo appearances in the new songs and concentrate on other areas of life and love’s rich tapestry. I’m broadening my horizons.”

You’re playing at The Hangover Lounge’s Lost Weekend next month at Union Chapel. Do you have anything special planned for it?

When will we see a full-band Withered Hand playing live again? Do you have any festival appearances planned for this summer?

“I don’t know and no festival appearances planned. I play solo a lot too so sometimes unfortunately ages pass between seeing the friends who comprise my ‘band’. Also with making this new record, I think I can feel a reclusive period coming on.”