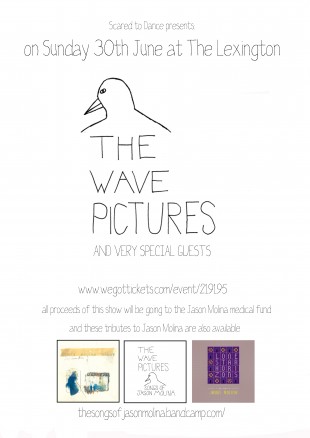 We are delighted to present The Wave Pictures at The Lexington on Sunday 30th June.

The proceeds of this show will be going to the Jason Molina medical fund. You can read more on The Songs of Jason Molina page.

On the night we have secret special guests as main support plus Rotifer opening the show. Tickets are now on sale at WeGotTickets.

The Wave Pictures are David Tattersall, Franic Rozycki and Jonny “Huddersfield” Helm. Formed in 1998 when Franic and David lived in a village called Wymeswold, the band played with several drummers until Jonny became a permanent member in 2003 replacing Hugh J Noble. In the beginning the band learned to play together by covering Jonathan Richman songs but soon David was writing lots of original material. These songs along with a few covers comprise the albums More St. Less TV and Just Watch Your Friends Don’t Get You, which were recorded at home over two days, using an old tape four-track. Following unsuccessful attempts to record in a studio with an unsympathetic producer, the band continued to record at home to keep a track of David’s prolific output. These recordings formed the next three albums The Airplanes At Brescia, The Hawaiian Open Mic Night and Sophie.

They have since released five studio albums to critical acclaim and played numerous sessions on BBC 6 Music, Radio 1 and Xfm. The interest generated by these recordings has enabled The Wave Pictures to play shows all over the world with artists including Jeffrey Lewis, Darren Hayman, Stanley Brinks, Freschard and Herman Dune. Coming off the back of a UK tour with residencies in Brighton, Manchester, Glasgow, Edinburgh, Newcastle and York, their new album is released in October on Moshi Moshi Records.

We have support from some very special guests who are a favourite of ours. All will be revealed on the night, you won’t be disappointed.

Opening the gig will be Rotifer. Rotifer is the three-piece vehicle for the songs of one Robert Rotifer, Vienna born songwriter, broadcaster and journalist whose day job is calmly interviewing rock and pop royalty, while also doing quite a bit of painting and drawing on the side. In 2010 his semi-animated video for the song “The Frankfurt Kitchen” was exhibited and acquired by MoMA New York.

In September Rotifer will bring out The Cavalry Never Showed Up, his second full-on UK album release on the newly formed Gare du Nord label (the first was on Edwyn Collins’ AED Records in 2011), elegantly crafted and intelligent, edgy pop for discerning listeners who appreciate the twang of a Telecaster, a sharp lyric and the cut of a 60s actor’s suit.