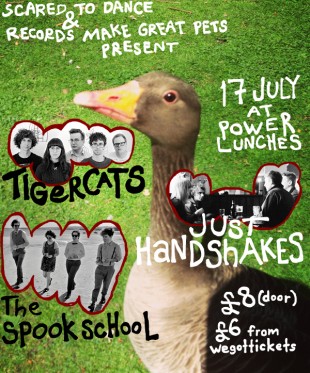 We’re pleased to announce that Tigercats will be playing at Power Lunches on Wednesday 17th July.

Support comes from Just Handshakes and The Spook School. This is a co-promotion with our friends at Records Make Great Pets and tickets can be bought from WeGotTickets.

Tigercats are Duncan, Giles, Jonny, Laura and Stefan. Figuratively, they are made of Violent Femmes, Chic, Buzzcocks, Feelies, Hefner, Lonnie Donegan, and Life Without Buildings. Literally they are made of Esiotrot and Hexicon. They live in East London and make music of open-hearted joy and sparkly-eyed adventure. If you like songs that start with intimate confession and end in furious vegetarianism, or studies of Konnie Huq’s easily-forgotten role in the Beijing Olympics, you’ll love Tigercats. Following singles on Haircut records and WeePOP! and their album Isle Of Dogs was released on Fika Recordings last year.

Just Handshakes are something of a rarity these days, a British indiepop band that are worth shouting about. A four piece currently based in Leeds, they sit somewhere between the oscillating pop of Jenny Lewis in her Rilo Kiley days and a doo-wop Metric. Their recordings are packed with just crisp choruses and sweetly decorated lyrics. Odd splatterings of Casio, a sprinkle of boy/girl backing and a nice line in tip-tap drumming make them all the more enticing. They have just released their debut album Say It on Bleeding Gold Records to rave reviews.

The Spook School are four noisey people from Edinburgh, Scotland. They write honest indiepop songs, full of energy with raucous guitars and drums. They pen love letters to other DIY bands which have been described as “charming”, “hilarious” and “terrifying”. Their drummer Niall McCamley will remove his t-shirt and give it to one lucky member of the audience. You do not want to miss these guys live. They are due to release their debut LP on Fortuna POP! later this year.