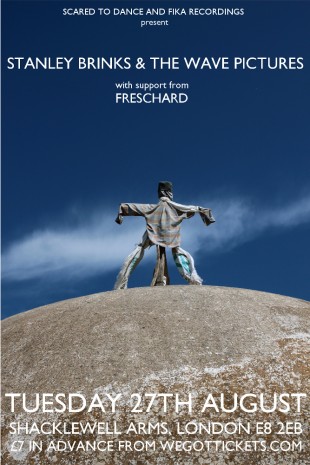 Stanley Brinks & The Wave Pictures will be playing at The Shacklewell Arms on Tuesday 27th August.

This show is a co-promotion with our friends at Fika Recordings and tickets are now available from WeGotTickets. Support on the night comes from Freschard.

Stanley Brinks is the current identity of André Herman Düne, formerly of the French folk rock band Herman Düne. He has recorded and played shows in Europe, the UK and the US under various other names such Ben Dope, Ben Haschish, Klaus Bong, John Trawling, Lord Stanislas.

Since leaving Herman Düne in December 2006 he has been championed by the likes of Jeffrey Lewis (who wrote a song about how Herman Düne were better when André was still in them) and in 2012 he collaborated with The Wave Pictures for their debut joint release. The follow up album is due to come out on Fika Recordings next year.

Stanley Brinks will be joined by The Wave Pictures as his backing band for this show. The Wave Pictures are David Tattersall, Franic Rozycki and Jonny “Huddersfield” Helm. Formed in 1998 when Franic and David lived in a village called Wymeswold, the band played with several drummers until Jonny became a permanent member in 2003 replacing Hugh J Noble. In the beginning the band learned to play together by covering Jonathan Richman songs.

They have released a twelve studio albums to critical acclaim and played numerous sessions on BBC 6 Music, Radio 1 and Xfm. Their new album, City Forgiveness, will be out in October on the Moshi Moshi label.

Growing up in a farm in French Burgundy, she moved to Paris at the age of 18 where she baked pies and cakes in a café. There, a local musician and regular customer called André Herman Düne wrote a few songs for her to sing.

In 2004 she moved to Berlin, where she recorded her first LP Alien Duck with a mix of electronic and acoustic sounds. Her second album Click Click, recorded in 2006, features a drummer (Leo Bear Creek) and electric guitars by Stanley Brinks. On her third album, Moonstone she plays the drums herself. She works as a sound engineer and records her friends’ music. She also has a calypso cover band with Stanley Brinks, called Kreuzberg Museum.