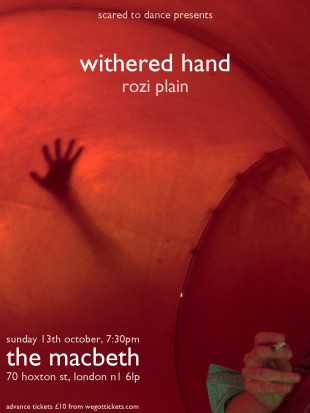 We’re delighted to announce that Withered Hand will be playing at The Macbeth on Sunday 13th October.

This is a rare full band show and tickets can be bought in advance from WeGotTickets. Support comes from Rozi Plain.

Withered Hand is the music of Dan Willson. Dan came late to singing and songwriting. He found his voice at age 30, in a period of reflection somewhere between the death of a close friend and the birth of his first child.

The moniker Withered Hand encompasses Dan’s activity as a songwriter, a solo performer and also exists in a band form. He has toured widely in the last 5 years to acclaim both nationally and in mainland Europe, playing his first shows in the USA in 2012. Withered Hand has recorded several BBC radio sessions and played various festivals as well as collaborating with the likes of Pam Berry (Black Tambourine), Darren Hayman and King Creosote.

Having released Good News to widespread critical acclaim in 2009 and following that up with the Inbetweens and Heart Heart EPs, Withered Hand are currently working on a follow up LP.

Rozi Plain is a solo musician based in London. Originally from Bristol, she has released two albums for Fence Records, Inside Over Here and Joined Sometimes Unjoined.

The unassuming charm of Rozi’s live show has led to tours across Europe, the UK and the USA. Notable tours include supporting Devendra Banhart (who fell for her debut album and named it one of his albums of the year), James Yorkston and Viking Moses, as well as appearances at festivals such as Green Man, End of the Road and Fence Record’s flagship event Homegame.

Whether performing alone or joined by an assembly of her regular musical allies (including François & the Atlas Mountains, This Is The Kit, Rachael Dadd and Sleeping States) her songs possess both fragility and a sense of plucky charisma in one fell swoop. Claiming fans of Josie Long, Gideon Coe, Lauren Laverne and Marc Riley, she has recorded a number of sessions for BBC 6 Music.