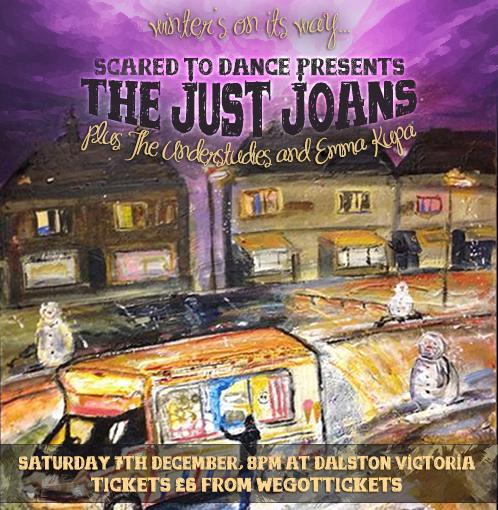 On Saturday 7th December we have The Just Joans playing at The Victoria.

Scotland’s finest The Just Joans make a long-awaited return to London for this rare full band show. Marking the release of their new EP 6.9 Love Songs, the band have now expanded to a six piece amassing an enthusiastic following with each gig, festival appearance, and through their steady output of mini-albums and EPs on WeePOP records. They write songs about being “lonely, thoroughly bored and yearning for something more…” and after their brilliant acoustic set at Indietracks Festival this year featuring modern day indiepop classics like “If You Don’t Pull…”, “What Do We Do Now?” and “Durex Puppy” we can’t wait for this gig. They’ve even promised one or two Christmas songs.

A standout band amongst the UK’s independent music scene, The Understudies have been gaining a prolific live reputation over the past few years. They’ve been favourably compared to the Tindersticks, Butcher Boy and Felt with Drowned in Sound saying “their sophisticated indiepop is a blessing.” With the addition of two new members fleshing out their sound since their well-received EPs, Wanting vs Getting and Press Play for Songs by The Understudies, their debut album will be out next year on the Berlin-based Firestation Records.

Former Standard Fare front woman and now with Without Feathers and Mammoth Penguins. Emma Kupa has been described as having an “endearingly sideways yowl, one that often finishes lines on an unexpected upward lilt” (Pitchfork), writing songs that are “clear-cut fun, delivered at a frantic pace with a healthy dose of bittersweet angst” (BBC) and someone who “once again deserves and gets center stage” (AllMusic). Her solo performances are always a joy and are not to be missed.

The writer and broadcaster Dougie Anderson will be spinning records in-between the bands.