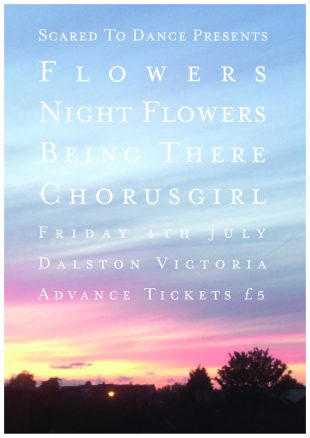 We’re starting a brand new gig night at The Victoria on Friday 4th July and the headliners for our first night are Flowers.

Support comes from Night Flowers, Being There and Chorusgirl and tickets can be bought for £5 from WeGotTickets.

Flowers are set to release their debut LP produced by former Suede guitarist Bernard Butler on the Fortuna POP! label. They draw a line between the joyous fuzzpop of The Pains of Being Pure at Heart, who they have toured Europe with, and the minimalist brilliance of Young Marble Giants with screaming distortion calming down to singer Rachel Kenedy playing solo on a one-stringed bass. The trio create a wall of sound larger than the sum of their parts – catchy pop songs hidden in noise.

Night Flowers are five friends originally from Humberside and now based in East London. They recently launched their debut 4 track EP on Dirty Bingo Records. One of our favourite releases this year, we’re tipping them to go on to big things. They play melodic indie rock/pop music influenced partly by 80s jangle and early 90s shoegaze.

Being There put out their first album on Young & Lost Club records back in 2012 and they’ve just finished recording a batch of new songs ahead of another release. Lo-fi indiepop with fuzzed out guitars and sweetly played melodies, they’ve been described by the NME as “baggy beauties”.