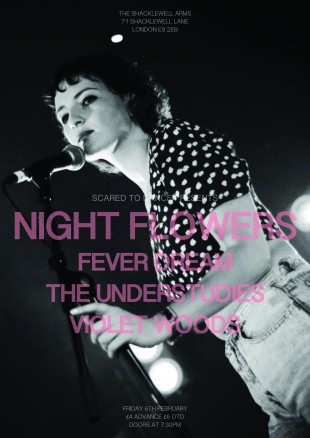 Our gig night returns with a new home for 2015 as Night Flowers headline The Shacklewell Arms on Friday 6th February.

Tickets can be bought in advance for £4 from WeGotTickets and they’ll be £6 on the door.

Night Flowers were our breakthrough band of last year releasing their spectacular self-titled debut EP on Dirty Bingo Records. Five friends originally from Humberside who are now based in East London, they play melodic indie rock/pop music influenced partly by 80s jangle and early 90s shoegaze. Pitchfork gush that “Night Flowers stand out from their modern peers merely because they’re the rare band that sounds like they want to.”

Fever Dream play dark, fuzzy, menacing music that blurs the line from noisy new wave to angular post-punk. Frantic shreds of guitar over that bass sound held together by tight as drumming. Easily one of the best live bands around at the moment, they’re currently recording their debut album.

A stand out band amongst London’s independent music scene, The Understudies released their debut LP Let Desire Guide Your Hand last year. A favourite of Pete Paphides, they’ve been favourably compared to the Tindersticks, Butcher Boy and Felt with Drowned in Sound saying “their sophisticated indiepop is a blessing.”

Consisting of members of Fuzzy Lights and The Puncture Repair Kit, Violet Woods take their cues from the depth of 60s British psych-pop and dusty West Coast jams. 12-string electric guitars, surf bass lines, ghostly vocals and rolling beats collide in lo-fi unison like a lost 7’’ playing on a dansette.