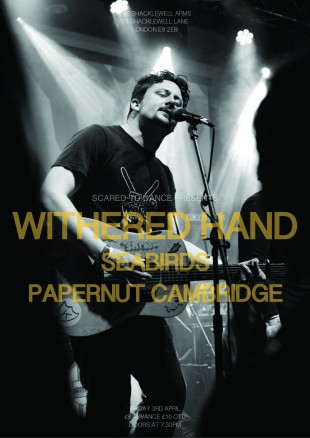 Scared To Dance’s gig night is back with Withered Hand headlining The Shacklewell Arms on Friday 3rd April.

Withered Hand is the music of Dan Willson. For this headline show he will be performing solo and playing new songs, helped out by Pam Berry, formerly of seminal noisepop band Black Tambourine. He has recorded several BBC radio sessions and played various festivals as well as collaborating with the likes of King Creosote and Eugene Kelly. Having released his debut album Good News in 2009 and following that up with the Inbetweens and Heart Heart EPs, Withered Hand released the universally acclaimed New Gods on Fortuna POP! last year breaking into the Top 100 UK albums chart.

Seabirds are a five-piece band from Nottingham. Featuring several members of Red Shoe Diaries, who released two superb EPs, the band released their debut single “Real Tears” on Californian label Matinée Recordings in 2013. For fans of melodic indiepop along the lines of The Tinderticks and The Lucksmiths.

Papernut Cambridge is a collective based around Ian Button, formerly of Death in Vegas and Thrashing Doves. Onstage they are represented by Button and an ever-changing cast of musical friends including Darren Hayman, Jack Hayter, Ralegh Long, Robert Rotifer, Robert Halcrow, Citizen Helene and many others. They have released two albums, Cambridge Nutflake and last years There’s No Underground, both on Gare du Nord Records.