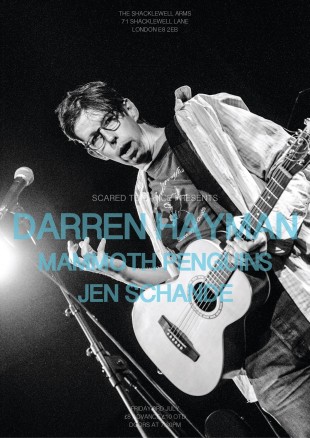 Our gig night is back with Darren Hayman headlining The Shacklewell Arms on Friday 3rd July.

Formerly of Hefner, The French and Hayman, Watkins, Trout & Lee, Darren Hayman has released twelve albums since going solo in 2006. Working with numerous other bands in that time including Rotifer, Papernut Cambridge and now The Great Electric and Brute Love, he released his latest album Chants for Socialists on Where It’s At Is Where You Are to widespread critical acclaim in February. A captivating live performer, he’s been described by Q magazine as “a true treasure”.

Mammoth Penguins is the new band fronted by Emma Kupa, formerly of BBC 6 Music favourites Standard Fare. When the band called it a day after nine years and two albums, Kupa upped sticks and moved from Sheffield to Cambridge where she recruited Mark Boxall (bass) and Tom Barden (drums) for her new project. They release their debut LP Hide and Seek on Fortuna POP! this month and they’ll be playing songs from the album at this show.

Schande was the brainchild of Californian girl Jen Chochinov. They released two albums and an EP before Jen relocated to London. In-between she released an EP under the name This Is Thunder with the electronic musician Nopse. She has since performed solo culminating in 2012’s 19: Songs for and Inspired by Valencia Chapter 19 and this year’s split single “The Russian” alongside Girl One and The Grease Guns on Squirrel Records.

The writer and broadcaster Dougie Anderson will be spinning records in-between the bands.