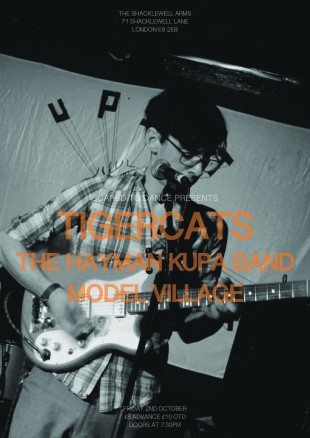 Tigercats headline our gig night at The Shacklewell Arms on Friday 2nd October.

Having carved out a coveted space in the scuzzier realm of kinetic indiepop, London five-piece Tigercats have now delivered second album Mysteries, an assuredly contagious record bristling with melody and noise, and mapped out on a lyrical landscape populated by gated longings, bleached-out city skies, and skewed entanglements of the heart.

Tigercats make music that stems from the weird collision point between Half Japanese, Hefner, Daniel Johnston, Prince and Orange Juice, shuttling through this heady constellation armed with a pop sensibility marked out by its eloquence and ferocity. Duncan Barrett and Laura Kovic articulate sweet laments and aspersions over swathes of magnetic agit-glam-punk noise which prowls an alternately feral and refined musical terrain.

Model Village are some kind of pop band from London and Cambridge with a form book as long as your arm where previous bands are concerned. None of that matters now though, so come and revel in the Model Village of the future. Dan, Ian, Kenny, Kev, Piers, and Lily currently make up the residents’ committee.

Our resident DJ Sam Cottis of the blog For The Rabbits will be spinning records in-between the bands.