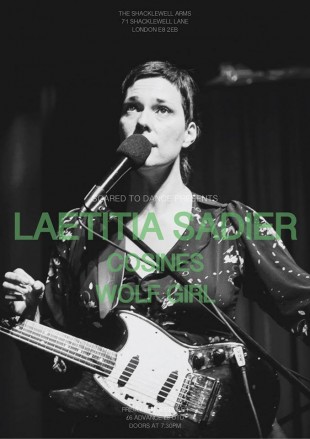 Tickets can be bought in advance for £6 from WeGotTickets and they’ll be £8 on the door.

Since Stereolab went on indefinite hiatus in 2009, Laetitia Sadier has released three solo albums; The Trip, Silencio and Something Shines. An enthralling live performer, Pitchfork praised “her voice still oozes ethereality and sophistication” on her debut LP. Sadier was a member of the hugely influential McCarthy, played in the dreampop side project Monade and has contributed vocals to various groups and projects such as Blur, Luna and Benjamin Schoos.

Cosines are a mathematical pop band from North London. Simon Nelson and Alice Hubley met on the London Underground after a Stereo Total gig. They started making music together, fusing metronomic pop sensibilities, 60’s grooves and krautrock noise. The band’s line up was completed by Hubley’s old Loves bandmates Daniel Chapman and Jonny Drums and A Smile and A Ribbon’s Kajsa Tretow. They played their first show in April 2012, and since then have played shows with Comet Gain, Shrag and Still Flyin’ as well the Indietracks Festival releasing singles on Fika Recordings.

Wolf Girl are a garage pop four-piece based in South London. Their debut EP Mama’s Boy was released on limited edition cassette on Soft Power Records in 2014, and stays true to the poppy energy of their frenetic live shows. It’s been said that they both do and don’t sound like the Ramones, and have also been compared to both The Shop Assistants and Bratmobile.