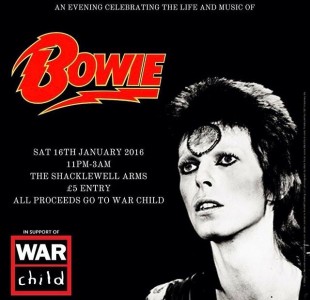 After yesterday’s tragic news we decided we should something to celebrate the life and music of David Bowie.

The Shacklewell Arms are hosting a tribute on Saturday 16th January with all of the money going to War Child, a charity Bowie supported during his lifetime.

We’ll be playing some records by the man and alongside those artists he influenced and was influenced by alongside Bad Vibrations, Night Terrors, Black Wax and Ulrika Spacek.

Come along and please help spread the word via the Facebook event.