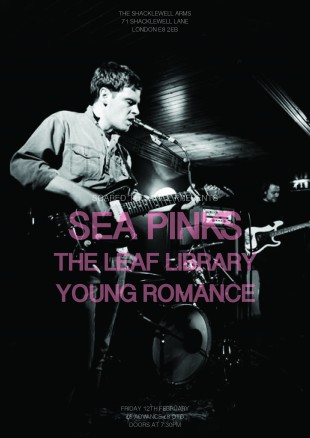 Our gig night is back for our first show of the year with Sea Pinks headlining at The Shacklewell Arms on Friday 12th February.

Tickets can be bought in advance for £6 from WeGotTickets and they’ll be £8 on the door.

Sea Pinks are a Belfast trio consisting of Neil Brogan on guitar and vocals (also known as a founder member of Girls Names), Steven Henry on bass and Davey Agnew on drums. Their new LP Soft Days is the band’s second full-length studio record following on from 2014’s Dreaming Tracks and three previous DIY albums.

It’s a snapshot of a band growing in confidence and hitting its stride as a three piece. It’s also thrillingly eclectic, cherry picking genres with magpie abandon with rave reviews from Q, Uncut, Louder Than War, Clash and The Line of Best Fit as well as airplay on BBC Radio 1 and BBC Radio 6 Music. Together, they unite on forging blissful guitar pop out of everyday tension and are without doubt one of the most distinctive guitar bands around right now.

The Leaf Library are a London-based quintet who have recently released their debut album Daylight Versions on one of our favourite labels WIAIWYA. They play shimmering shoegaze and deep drone that evokes the changing seasons which has been compared with Stereolab. Championed by the likes of Pete Paphides and Gideon Coe, Daylight Versions received a glowing a five star review in The Guardian. Not to be missed.

Young Romance are an indiepop duo whose musical evolution wraps joyous vocals depicting a sorrowful narrative in a blanket of distorted guitars. Last year they put out their first EP Wild on Banquet Records on the back of support slots with the likes of Summer Camp, Slow Club and Mystery Jets. Keep an eye out for the release of their debut LP coming soon.