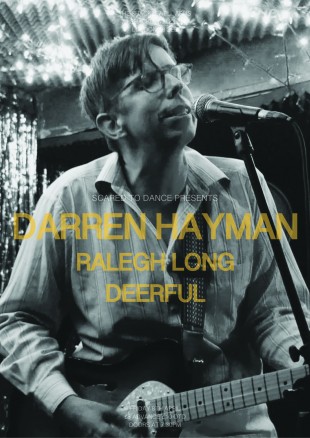 Support comes from Ralegh Long and Deerful. Tickets can be bought in advance for £8 from WeGotTickets and they’ll be £10 on the door.

We’re thrilled to welcome back one of our favourite songwriters Darren Hayman for this night. For fifteen years, and over fourteen albums, Hayman has taken a singular and erratic route through England’s tired and heartbroken underbelly.

Influenced by punk through his art college years and then American lo-fi indie in the ’90s he fronted John Peel favourites Hefner. Since then he’s been part of The French, Hayman, Watkins, Trout & Lee and Brute Love. It is his solo career that has earned widespread critical acclaim with The Guardian stating that his songwriting was “the match of Ray Davies”. His most recent album Florence was released on the excellent Fika Recordings label.

Ralegh Long is an English singer-songwriter. His critically acclaimed debut album Hoverance was released on Gare du Nord records in 2015. It is a beautifully pastoral record, in the tradition of Bill Fay and Nick Drake. Tracks from Hoverance received airplay on BBC 6 Music, from DJs including Lauren Laverne, Guy Garvey and Gideon Coe, BBC Scotland, BBC Introducing and Amazing Radio. The Guardian praised it for its “twilit ambience and demented beauty”, and in a four star review MOJO celebrated its “spooky pastoralism”.

Deerful is Emma Winston, a London-based multi-instrumentalist, singer, maker and academic. After several years spent as a session keyboard player and vocalist for artists and bands including Owl & Mouse and Enderby’s Room, she decided to begin making music of her own. She writes and performs story-led, electronic pop on miniature synthesisers about running away, staying in place, brokenness, recovery, and taking up space in the world.