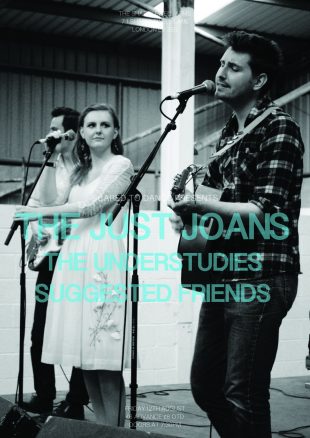 The Just Joans headline our gig night on Friday 12th August at The Shacklewell Arms.

Support comes from The Understudies and Suggested Friends. Tickets can be bought in advance for £6 from WeGotTickets and they’ll be £8 on the door.

The Just Joans make a long-awaited return to London for this rare full band show. Hailing from Motherwell via Glasgow and Edinburgh, the band have now expanded to a six piece amassing an enthusiastic following with each gig, festival appearance, and through their steady output of mini-albums and EPs on WeePOP records. They write songs about being “lonely, thoroughly bored and yearning for something more.”

The Understudies have been gaining a prolific live reputation since their debut EPs Wanting vs Getting and Press Play for Songs by The Understudies. They’ve been favourably compared to the Tindersticks, Butcher Boy and Felt with Drowned in Sound saying “their sophisticated indiepop is a blessing.” Their debut album is available on the Berlin-based Firestation Records.