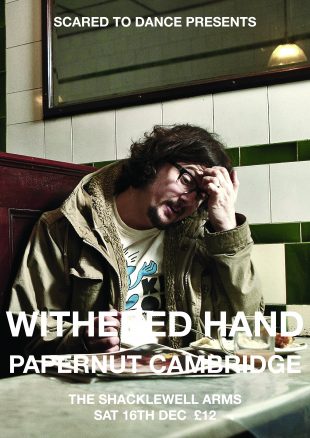 Support comes from Papernut Cambridge and tickets can be bought from WeGotTickets.

He has recorded several BBC radio sessions and played various festivals as well as collaborating with the likes of King Creosote and Eugene Kelly. Currently working towards his third full-length album, Withered Hand continues to tour and play one-off dates in venues from concert halls to living rooms.

Papernut Cambridge is a collective based around Ian Button, formerly of Death in Vegas and Thrashing Doves. Onstage they are represented by Button and an ever-changing cast of musical friends including Darren Hayman, Jack Hayter, Ralegh Long, Robert Rotifer, Robert Halcrow, Citizen Helene and many others. They have released several albums on Gare du Nord Records.