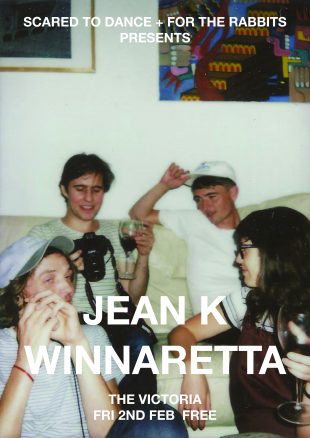 Jean K headline the Scared To Dance and For The Rabbits gig night on Friday 2nd February at The Victoria.

Entry is free and support comes from Winnaretta.

Jean K are a new four-piece band based out of East London. The band started as the brainchild of Strasbourg-born singer Jean Kern alongside producer Michael Tomlinson, now fleshed out to a live band with the help of keyboardist Laura and bassist Gordon.

The band formed with the noble aim of infusing indiepop with a much-needed disco twist. Jean K’s debut single, “Billy”, a dancefloor homage to Kurt Vonnegut’s absurdist classic Slaughterhouse Five, was released last year on Crocodile Records. Music that challenges both your mind and your feet; it doesn’t come much more exciting than Jean K.

London-based trio Winnaretta burst onto the DIY-scene last year with their debut EP, Mine, recorded at Soundsavers Studio with the ever excellent Mark Jasper. The band deal in catchy pop songs infused with complex rhythms and tight harmonies.

Mine might be barely fifteen minutes long but it packs in everything from afro-beat to slacker-rock; coupled with a reputation as one of the best live acts in the capital, Winnaretta are a band not to be missed. They do things loud, DIY and queer.