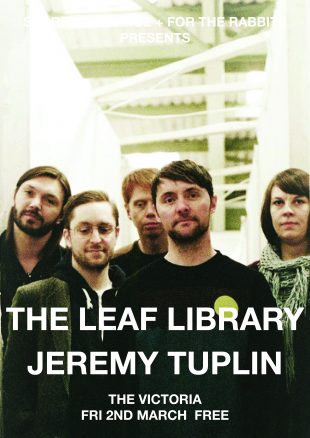 The Leaf Library headline the Scared To Dance and For The Rabbits gig night on Friday 2nd March at The Victoria.

Entry is free and support comes from Jeremy Tuplin.

The Leaf Library make multi-layered, two-chord drone pop, channelling the warm fuzz of Yo La Tengo, the spacious repetition of Talk Talk, and Movietone’s seaside. The band released their debut album, Daylight Versions, on WIAIWYA back in 2015, a collection of hazy, drone-laden love songs to meteorology and the sea, which received backing from the likes of Uncut and The Guardian among others.

Live they add a volume and intensity to their recorded material, driving motoric rhythms sing out atop bed of synths, weaving guitars and whatever a variety of guest performers bring on the day from flugelhorns to saxophones. The band released double A-side single “City In Reverse”/”Kendrick Road” in October 2017, and are currently working on their second album due for release in 2018.

Somerset born, London based songwriter Jeremy Tuplin is a musician equally influenced by Andy Shauf and documentaries about space. Courtesy of his rich Bill Callahan like baritone he weaves lyrical paintings, equally as likely to be odes to Albert Einstein as musings on the fleeting nature of youth.

Throughout his most recent album, I Dreamt I Was An Astronaut, there is an attempt to fuse the minutia of everyday living, with all its heartbreaks, money worries and existential crises, with the wider questions of the universe and our tiny, almost insignificant place in it all. Performing solo here, this will be a rare opportunity to hang off his every crafted word.