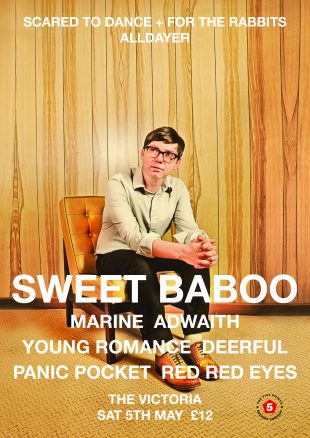 Sweet Baboo headline the Scared To Dance and For The Rabbits alldayer on Saturday 5th May at The Victoria.

Tickets are now on sale from WeGotTickets.

Sweet Baboo is Stephen Black. An eclectic and intriguing songwriter, Sweet Baboo is a master of gorgeous upbeat acoustic ditties, psychedelic exploration and wide-screen 1960’s pop. While likely to showcase material from across his impressively eclectic back catalogue, the set should borrow heavily from last year’s Wild Imagination, “the perfect pick-me-up to the winter of our discontent.” It was an album written as an antidote to our times, an attempt to free himself of negativity and dare to dream of a brighter tomorrow.

Musically, the record stepped away from the Harry Nilsson-esque love song of 2015’s The Boombox Ballads and into a world of positivity, the resultant music sounded like the missing middle ground between Arthur Russell and The Beach Boys. An intriguing artist, always pushing at the boundaries of any attempt to pigeonhole himself or his music, Sweet Baboo is firmly established as one of music’s most intriguing experimenters and most important voices.

On their recently released debut album, Fable Electric, London-quartet, Marine quickly set about living up to all the hype around them. Drawing comparison to the likes of Warpaint and PJ Harvey, Marine make the music of contrasts, driving beats and hypnotic a-melodic bass sit menacingly beneath intricate vocal harmonies and hook-laden guitar lines. Marine take the extraordinary stuff of legend and place it firmly into the everyday world that surrounds them, theirs is the sound of four different musicians growing through the cracks in the urban landscape and combining to something far greater than the sum of their parts.

One of Welsh music’s fastest rising new bands, Adwaith are the trio of Hollie, Gwenllian and Heledd. Loosely described as post-punk, Adwaith’s sound seems to trace a lineage of arty musical outsiders from The Slits through to Datblygu – whose member Patricia Morgan helped Adwaith develop their sound. The band have released a number of singles, showcasing various sides of their music from the wistful, folkish wonder of “Pwysau” to the more energetic alt-rock of “Haul” and the emotional beauty of recent single, “Fel I Fod”. Lyrically they tackle sexism, political injustice and personal crisis, flittering between English and Welsh with impressive ease.

Since their formation six years ago Young Romance have gone about building a reputation as a thrilling live prospect. Even before releasing any records they’d shared stages with the likes of Mystery Jets and Slow Club. Those early shows were time well spent; honing their sound which pairs Paolo’s searing, heavily effected guitar lines with Clare’s primal pounding drum beats, and heartbreaking, intricate vocals. They released their excellent debut album, Another’s Blood, back in 2016 and this will be a chance to hear material from the upcoming, as yet untitled follow-up.

Deerful is the solo-electronic project of indiepop academic, Emma Winston. Armed with an array of miniature synthesisers, Deerful’s sound is a combination of soaring choral vocals, and twitching processed beats. Debut album, Peach, came out last Summer on WIAIWYA, an album about affirming the ordinary and vital; it was a reminder that whatever was going on in the world, there are still tiny shared moments that make life still well worth celebrating.

Panic Pocket have wasted no time in making their mark on the London DIY-scene. Sophie and Natalie released their debut single back in January, showcasing a penchant for bedroom anti-folk and glitchy electro-pop. Cathartic songs about shaking off bad relationships, the life-changing nature of female-friendship and the perils of online dating, are all delivered with a wry sense of humour and an undeniable charm.

Red Red Eyes are the Cambridge-based duo of Laura McMahon and Xavier Watkins. Their sound is one of cinematic drones and intricate twanging guitars, as if Enio Morricone teamed up with Broadcast to write the soundtrack for the best post-apocalyptic film you’ll ever see. The band are set to release their debut album Horology in May, a record where soft, almost hushed vocals are accompanied by intricate, delicate guitars and waves of dark, melancholic synths.