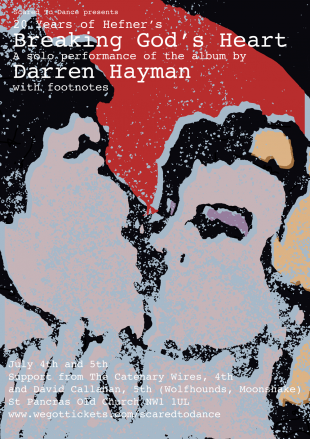 Wednesday 4th July support comes from The Catenary Wires and on Thursday 5th July David Callahan from The Wolfhounds supports. Both nights are sold out.

The Catenary Wires are Amelia Fletcher and Rob Pursey. They formed in 2014 and their debut mini-album Red Red Skies was released a year later on Elefant Records in Europe and Matinée Recordings in the USA.

David Callahan is the frontman of The Wolfhounds. Formed in Essex in 1985, the band released four LPs in their first incarnation until 1990 including a spot on the NME’s legendary C86 compilation.

Whilst on hiatus, Callahan resurfaced with the much-lauded Moonshake on the Too Pure label. Co-led with Margaret Fielder, the band was notable for its extensive use of textures and sampler technology in a rock context. Since reforming in 2005 The Wolfhounds have returned with two well-received albums and continue to perform across Europe.