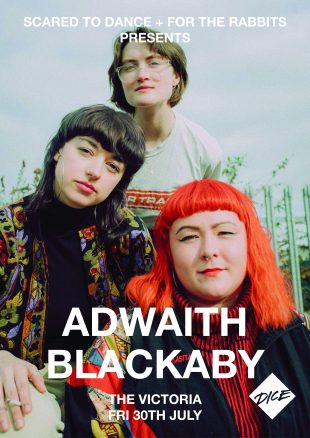 Adwaith headline the Scared To Dance and For The Rabbits monthly gig night on Friday 30th July.

Support comes from Blackaby at The Victoria and you can get your free tickets at DICE.

Blackaby is both the surname and musical-moniker of London-based songwriter William Blackaby. On their recent EP, Everything’s Delicious, released via Hand in Hive, Blackaby took the influence of Wilco and Big Thief and injected a distinctly British-streak, that’s equally as likely to appeal to fans of Teleman or Meilyr Jones. Blackaby’s music taps into the seemingly inconsequential moments, how they shape our lives and define the difference between who we truly are, and who other people think we should be: everything’s delicious, if you let it be.