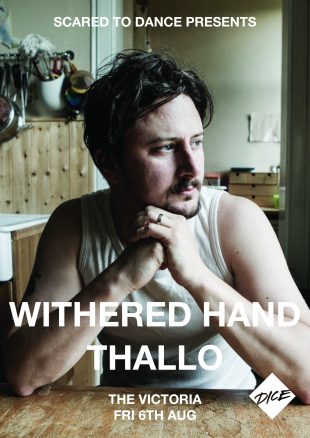 Scared To Dance presents Withered Hand on Friday 6th August at The Victoria.

Support comes from Thallo and tickets are on sale at DICE.

Withered Hand is the nom de plume of Edinburgh-based singer-songwriter Dan Willson, who will be performing solo for this performance. Dan started writing songs and singing in his thirties during a period of reflection following the birth of his first child and the death of a close friend. With a wayward tenor and unaffected charm onstage he has come to be celebrated in his adopted country and further afield as a songwriter and lyricist of rare wit and remarkable honesty.

With songs in both Welsh and English, Thallo’s rich, expressive sound is carefully weaved between voice and instruments in intricate arrangements. Her songwriting entwines archaic Welsh folklore with personal, poetic lyrics. Her music tells captivating stories through beautiful melodies, succeeding in creating an entirely unique experience. Her debut Nhw EP gained support from Huw Stephens whilst new single Pressed and Preserved has had backing from BBC Radio 1 and BBC 6 Music.