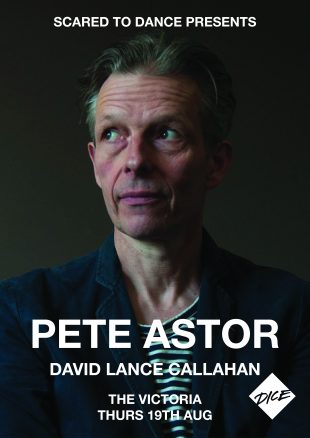 Scared To Dance presents Pete Astor on Thursday 19th August at The Victoria.

Support comes from David Lance Callahan and you can get your free tickets at DICE.

Pete Astor was singer songwriter in early Creation Records trailblazers The Loft and The Weather Prophets, releasing records that helped define the sound of the label and the emerging indie genre. He has gone on to a solo career, writing, recording and releasing records on a range of labels including Matador, Heavenly, Warp and Fortuna POP!

Cherry Red Records have just released a definitive collection by The Loft, Ghost Trains & Country Lanes. He recently released You Made Me, his new record of covers, marking a life in music, singing the songs of Cat Power, Billy Idol, Richard Thompson and Elvis Presley, to name a few. He is joined onstage by multi-instrumentalist Ian Button (Wreckless Eric, Death in Vegas, Papernut Cambridge) and Andy Strickland (The Loft, The Caretaker Race) to perform songs from the present, the past and, most importantly, the future.

David Lance Callahan is the frontman of The Wolfhounds. The band released four LPs in their first incarnation until 1990 including a spot on the NME’s legendary C86 compilation. Callahan resurfaced with the much-lauded Moonshake and has collaborated with members of Stereolab and PJ Harvey. Since reforming The Wolfhounds in 2005, they returned with two well-received albums. He is set to release his long-awaited solo album English Primitive I later this year.