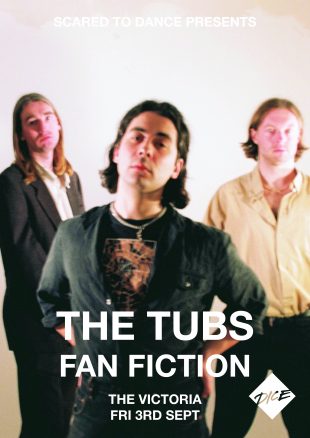 Scared To Dance presents The Tubs on Friday 3rd September at The Victoria.

Support comes from Fan Fiction and you can get your free tickets at DICE.

They hit the ground running, releasing the I Don’t Know How It Works 7-inch on Prefect Records in early 2020 and playing gigs with UK colleagues like Porridge Radio, Ex-Vöid and Marcel Wave, as well as support for Flasher & Public Practice. After a few line-up shuffles, they recruited Max Warren (bass), Steve Stonholdt (guitar) and Matthew Green (drums) to solidify the current line-up. Their new Names EP is out now on Trouble In Mind and Prefect Records.

Sam Lewis Valenzuela is an Anglo-Chilean songwriter who’s been making music since the early noughties. First as Being There, who released a record on Young & Lost Club and toured with Noah and the Whale, and then as one half of bedroom electronic pop duo Tree Trunks, who’ve been featured on BBC Radio 1 and BBC 6 Music. He’s also played in Rozi Plain’s band (and a bunch others you might know). Here he’s playing as Fan Fiction, exploring covers and new songs he wrote that helped him get through lockdown – and having his first baby.