YUMI AND THE WEATHER GIG ON FRI 13TH AUG 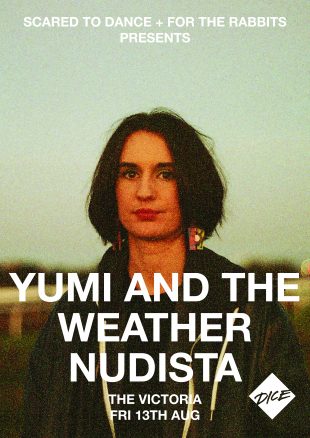 Yumi and the Weather headline the Scared To Dance and For The Rabbits monthly gig night on Friday 13th August.

Support comes from nudista at The Victoria and you can get your free tickets at DICE.

Based out of London, nudista are the duo of Spanish-born vocalist Pilar Matji Cabello and guitarist Robbie Carman. Bonding over a shared love of Yo La Tengo, Phoebe Bridgers and Neil Young the pair formed nudista. Freshly signed to Sad Club Records, the band recently shared their new single, “Confess”, which blurred the lines between the dreaminess of Mazzy Star and the urgency of Alvvays. With the track catching the ear of the likes of Clash and God Is In TV, nudista are a band on the rise.