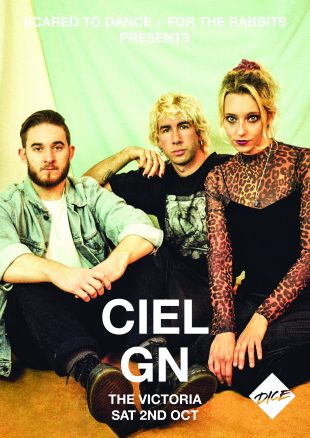 CIEL headline the Scared To Dance and For The Rabbits monthly gig night on Saturday 2nd October.

Support comes from GN at The Victoria and you can get your free tickets at DICE.

Originally from Groningen in Holland, CIEL has now made Brighton their home and have been winning over audiences with their dreampop snapshots ever since. With their 2020 EP, Movement, the band won over an ever-growing list of admirers, including tastemakers from Clash to BBC 6 Music.

The band are currently working on a series of stand-alone singles, each made with a different producer showcasing both their versatility and their winning way with an alluring melody. Having previously supported the likes of Penelope Isles, Marika Hackman, and bdrmm, we’re delighted to welcome back CIEL for a night of getting lost in their glorious shimmering magic.

Known up until now as the, “tall” (The Guardian’s words not mine) one in Joanna Gruesome and The Tubs, George Nicholls is stepping forward with his own solo-project, working under the musical moniker, GN. Taking influence from yacht rock and no wave, Arthur Russell and The Allman Brothers, GN’s debut single, “Home Business” came out in October last year via Prefect Records. Setting an exploration of “the neoliberal work ethic”, to an alt-pop groove, it was a thrilling introduction to a songwriting voice with an incredibly bright future ahead of him.