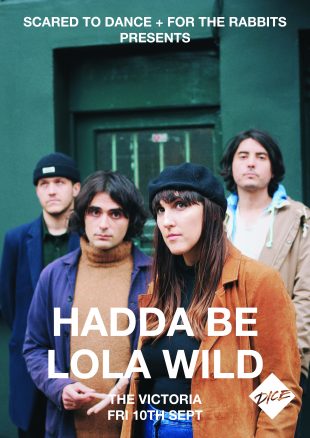 Hadda Be headline the Scared To Dance and For The Rabbits monthly gig night on Friday 10th September.

Support comes from Lola Wild at The Victoria and you can get your free tickets at DICE.

Hadda Be formed back in 2018, splitting their time between their two hometowns of South London and Brighton. Known originally as Foundlings, Hadda Be won acclaim with their early singles and eponymous EP gaining support from radio DJs and online tastemakers alike. With a new name, lifted from the Allen Ginsburg poem, Hadda Be Playing on the Radio, the band recently released their debut full-length record, Another Life via Last Night From Glasgow.

Aptly titled, Another Life is a thrilling fresh start for the band. Recorded in just five days at Brighton Road Studios, Another Life is a record inspired by the joy of playing live. The eleven tracks capture the raw energy and noisy thrills of the band’s stage show, drawing comparisons with everyone from Shrag and Elastica to Pixies and Siouxie and the Banshees. The band’s long-awaited return to the London stage is an event that you won’t want to miss.

Lola Wild are the London based duo of vocalist Sian Barnett and multi-instrumentalist George Godfrey. Formed in early 2020, the band are gearing up for the release of their Strange Shapes EP. Debut single Sand set the scene with its Spaghetti Western take on dreampop, while the band’s most recent offering Mirabella walked the line between the retro pop of Unloved and the atmospheric noir of Timber Timbre.