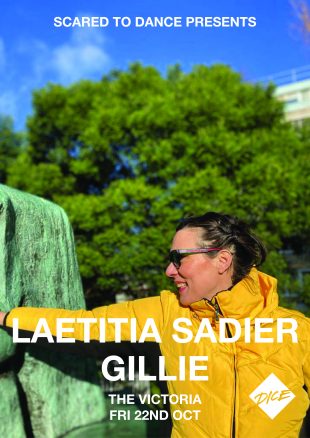 Scared To Dance presents Laetitia Sadier on Friday 22nd October at The Victoria.

Support comes from Gillie and tickets are on sale at DICE.

Laetitia Sadier is a founding member of Stereolab, the band have released 17 albums and compilations since they formed in London in 1990. In 1996 Laetitia started her solo career with a string of singles and 3 albums as Monade. Laetitia has since added a further 4 solo albums, the most recent being 2017’s Find Me Finding You. In addition to her own recordings, Laetitia has added vocals and lyrics to recordings by The High Llamas, Blur, Luna, Atlas Sound, Common, Marker Starling and Tyler, the Creator.

Raised within the Welsh heartlands of Carmarthenshire, music has always been second nature to Gillie Ione Rowland aka Gillie. Deeply influenced by place and now living within the burgeoning metropolis of London, Gillie blends the serenity of the Welsh countryside with the industrial undergrowth of city life, to create something hauntingly serene. Distinct in its simplicity yet vivid in atmosphere, the ease at which she entwines both her silken vocal style with a storytelling charm both striking yet subtle.