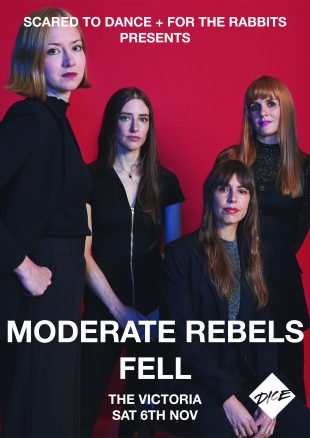 Moderate Rebels headline the Scared To Dance and For The Rabbits monthly gig night on Saturday 6th November.

Support comes from Fell at The Victoria and you can get your free tickets at DICE.

Moderate Rebels were never really meant to be a band. They formed on a one-off basis, yet enjoyed making 2017’s debut single “God Sent Us” so much that it has expanded into an EP, two albums and counting. Gaining high profile supporters from Lauren Laverne to John Kennedy, the band have recently signed to Moshi Moshi Records, who released their incredibly ambitious record If You See Something That Doesn’t Look Right, a three-part, thirty track musical opus.

If You See Something That Doesn’t Look Right is a bold and eclectic affair, featuring an eight-strong revolving collective of members who make music that is a free-form expression of joy through sound. With influences that stretch from the Pet Shop Boys to Syd Barret, Stereolab to Brian Eno, expect a myriad of sounds spun through a Moderate Rebel lens. Driving rhythms, discordant guitars, twinkling piano ballads and playful synthpop, you can’t pigeonhole Moderate Rebels, because they refuse to play along with your labels, and are every bit as exciting as that sounds.

Fell is the project of London-based artist, illustrator and creator of “sun-kissed psychedelic pop dreaminess”, Nicholas Burrows. Fell burst onto the UK scene back in 2019 with the well-received EP, For the Pickling, a series of songs of domesticity, half-forgotten pasts and imagined Lancastrian space missions. With a sound that goes from beat-driven desert folk to 60s pop and pretty much everything in between. With plans for a new album underway, Nicholas has recently been sharing his “sides” project, a series of tracks recorded live to cassette in a couple of hours in Fell’s practice room.