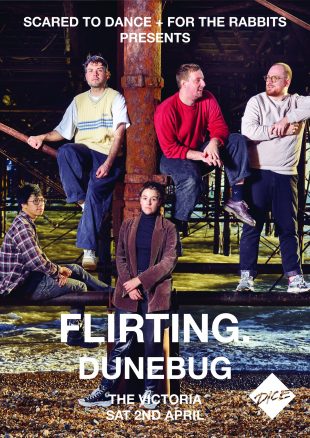 flirting. headline the Scared To Dance and For The Rabbits monthly gig night on Saturday 2nd April.

Support comes from Dunebug at The Victoria and you can get your free tickets at DICE.

Self-styled anxiety-pop quintet flirting. formed in East London back in 2016. They initially bonded over an eclectic array of music, noise and Vine videos, but ended up as what they describe as “a group therapy project, set to a Sofia Coppola soundtrack”.

Back in 2018, the band released their debut 5-track EP, This Would Be Funny If It Were Happening to Anyone But Me, a fascinating collage of musical ideas; flittering from Life Without Buildings-like post-punk, to spoken word musings and angst-driven noise. Unnerving, beautiful, brutal, bruising and utterly unique, flirting. defy convention, refuse your pigeon-holes and make one of the most exciting emotive rackets you’ll ever come across.

Dunebug is the London-based project of Manchester born songwriter Chi Limpiroj. Having first appeared in 2019 with her self-titled EP, Chi has followed up with a series of increasingly fabulous singles. Their most recent offering “Lie to Me” paired dreampop perfection with the dangers of casual relationships, while “Impossible With You” was a stunning re-imagination of a retro pop sound that nodded to the likes of Martha Ffion and Living Hour. Time spent with Dunebug is time well spent, as her music enters your ears it instantly feels like the start of a beautiful friendship.