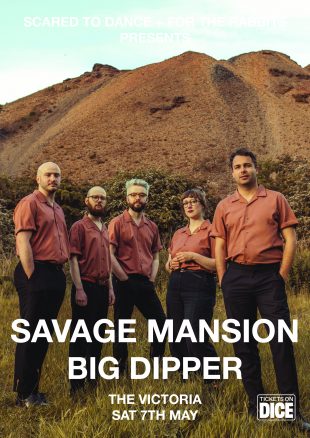 Savage Mansion headline the Scared To Dance and For The Rabbits monthly gig night on Saturday 7th May.

Support comes from Big Dipper at The Victoria and you can get your free tickets at DICE.

Savage Mansion have come a long way since their break-out album, Revision Ballads, with 2020’s critically lauded follow up Weird Country. When their touring plans hit an inevitable bump in the road, the band doubled down heading to Glasgow’s Chime Studio to make the fabulous third album, Golden Mountain, Here I Come.

Released via Lost Map, the album is their most collaborative and ambitious record to date. The record takes the DIY-garage rock of their previous material, yet dips its toe into a vast array of genres whether it’s the James Brown-like funk of “The Crucible” or the new wave swagger of “Plans”. For all the experimental edge, what remains so key to Savage Mansion’s charms is the razor-sharp lyricism, whether cutting down the ruling classes on “Football Weather” or urging us to maintain the collective spirit in the face of those that wish to divide us on “Life More Abundant”.

Based out of London via Atlanta, Big Dipper released their self-titled debut album in April last year. Recorded in Hackney, it was a collection of stamping rock ‘n’ roll glamour, bringing to mind everything from MC5 to Jonathan Richman. Now expanded to a four-piece band, and having recently released their brilliantly strutting new single, “Just Love”, Big Dipper’s thrilling retro-kicks are not to be missed.