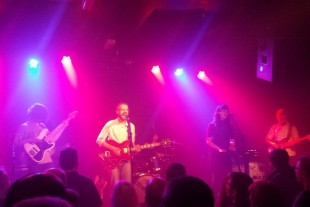 A fantastic gig as always last night at the Fortuna POP! Winter Sprinter.

Flowers premiered a number of songs from their upcoming second album whilst you can see Tigercats and Chorusgirl out on tour very soon.

Here’s what we played at the gig.

The Clash – If Music Could Talk
John Cale – Graham Greene
Brian Eno – Backwater
FFS – Call Girl
Belle and Sebastian – Play For Today
Talking Heads – (Nothing But) Flowers
Euros Childs – Machine
Sweet Baboo – Tonight You Are a Tiger
The Jam – Just Who Is the 5 O’Clock Hero?
Rotifer – I Just Couldn’t Eat As Much (As I’d Like to Throw Up) 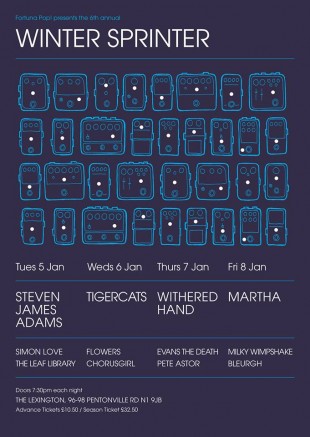 DJ SET AT TIGERCATS AT THE LEXINGTON

We’ll be playing records at the sixth annual Fortuna POP! Winter Sprinter on Wednesday 6th January. It’s a fantastic line-up with Tigercats playing with support from Flowers and Chorusgirl.

The Sprinter starts on Tuesday 5th January with Steven James Adams, Simon Love and The Leaf Library. On Thursday 7th January there’s Withered Hand, Evans the Death and Pete Astor. Then on the final night Martha headline with Milky Wimpshake and Bleurgh.

Four nights, twelve bands, DJs… the perfect antidote to the post-Christmas blues with the best of the Fortuna POP! roster plus special guests at The Lexington. 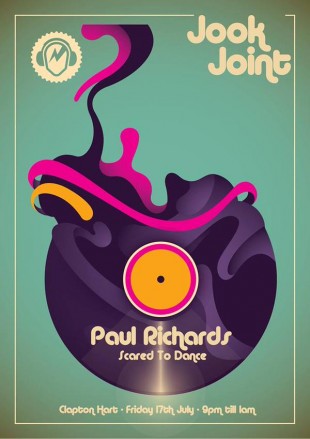 DJ SET AT THE CLAPTON HART

We’ll be playing records at our local The Clapton Hart on Friday 17th July.

This will be our first DJ set there and the concept is that we’ll be playing new music and records that don’t get played so much at the club night.

Think of it as the first hour of Scared To Dance where we play more unknown songs and those which you can’t dance to but over the course of the evening.

Come on down from 9pm to 1am and ease yourself into the weekend. 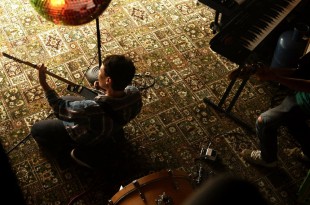 SETLIST FROM BEING THERE GIG

Being There were fantastic at Birthdays last night and it was nice to be asked to DJ in-between the bands. We can’t wait to see what the band do next.

You can see which records we played at the show below.

Emma Kupa – “Punch a Door Through”
Papernut Cambridge – “What She Said What She Said”
Flowers – “Forget the Fall”
PINS – “Too Little Too Late”
Evans the Death – “Sledgehammer”
The Tuts – “Do I Have to Look For Love?”
Tuff Love – “Slammer” 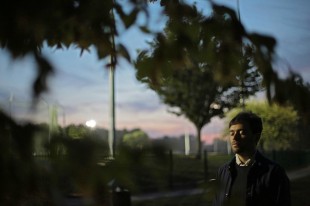 DJ SET AT BEING THERE AT BIRTHDAYS

We’ll be playing records at Being There’s gig at Birthdays in Dalston on Friday 20th March.

The band are launching their new four track Overnight EP on the Young & Lost Club label. You can see the video for the superb “Generator” on The 405.

Support comes from Fever Dream, Hairy Hands and Bamboo with doors opening at 7pm. It’s free to get in and full details can be found on the Facebook event. 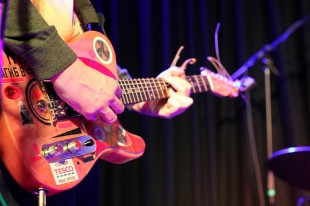 A fantastic gig at The Lexington as Darren Hayman & The Long Parliament sounded brilliant covering Prince and throwing in a Hefner song too at the Fortuna POP! Winter Sprinter. Don’t just take our word for it, check out The Guardian’s review of the night.

Check out which records we played at the gig below.

DJ SET AT DARREN HAYMAN AT THE LEXINGTON

The Sprinter kicks off on Tuesday 6th January with Withered Hand, Simon Love & The Old Romantics and Bill Botting. On Thursday 9th January there’s Martha, Evans the Death and Fulhäst. Then on the final night Tigercats play with Milky Wimpshake and The Hayman Kupa Band.

As always the Winter Sprinter showcases the best of the label’s talent over four days in the intimate surroundings of The Lexington, with many of the bands mentioned above involved in this unmissable curtain-raiser to the year.

A superb show from Allo Darlin’ at the Scala last night. It was wonderful to hear the songs from the new album live and how about that finale! It was brilliant to see Tigercats and Making Marks too.

You can see which records we played at the gig below.

DJ SET AT ALLO DARLIN’ AT THE SCALA

We’ll be DJing at the Allo Darlin’ gig at the Scala on Monday 24th November. They’ll be playing songs from their new album We Come Fom the Same Place.

Allo Darlin’ were formed after Australian Elizabeth Morris arrived in London and bought a ukulele from the Duke of Uke shop in Shoreditch. She began writing music and was soon joined by fellow Australian Bill Botting (bass), Paul Rains (guitar), and Michael Collins (drums).  Their debut album attracted many plaudits including being named No. 2 record of the year by online retailer eMusic, and a glowing 1,200 word essay by Robert Forster of The Go-Betweens in the Australian critical magazine, The Monthly.

Their second album Europe scored 8.1 on Pitchfork, was made USA Today’s Album Of The Week, and garnered praise from Uncut, Q, NME, The Quietus and The Guardian. It was also named Rough Trade Shop’s Album Of The Month, where it went on to become the biggest selling album of the year. The band have been playlisted at BBC 6Music and have recorded sessions for Lauren Laverne, Marc Riley and John Kennedy (XFM), as well being Steve Lamacq’s personal pick for BBC Introducing. Their releases to date, along with their joyous and effervescent live shows, have seen them build an intensely loyal and ever-increasing fanbase.