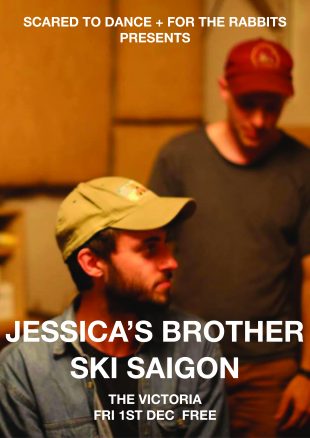 Jessica’s Brother headline the Scared To Dance and For The Rabbits gig night on Friday 1st December at The Victoria.

Entry is free and support comes from Ski Saigon.

Although yet to grace the internet with any recorded material, Jessica’s Brother are already creating waves of excitement via a series of impressive live shows. The London-based trio are fronted by singer-songwriter Tom Charleston, backed by former Ramshackle Union-bassist, Charlie Higgs, and Wave Pictures-drummer, Jonny Helm.

Describing their music as guitar, bass, drums and some ooo’s, the band’s take on rock music, infused with Americana influences and a twist of English-gothic darkness has rightly or wrongly drawn comparison with Pavement. This live show will be a first chance to hear material from their recently recorded debut album ahead of its as yet confirmed 2018 release.

Originally the brainchild of London-based lead-singer Rhys Griffiths, Ski Saigon has now expanded to a quintet featuring members of Mooncreatures, Grubs and Tigercats. Their sound is one of bright guitars, burbling dreamy-synths and muffled, muted vocals.

Ski Saigon burst onto the scene last year, with their well-received debut EP, released via a 32-page short story by Art Is Hard Records. They’ve recently shared their first material as a five-piece, in the shape of new single “Iran Tourist Dream”, a tantalising glimpse of where the music of this most intriguing new act is headed next.