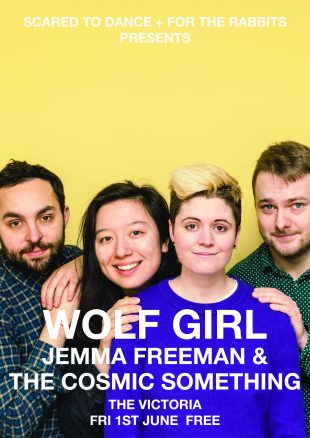 Wolf Girl headline the Scared To Dance and For The Rabbits gig night on Friday 1st June at The Victoria.

Entry is free and support comes from Jemma Freeman and The Cosmic Something.

Wolf Girl are a noisy pop four-piece based out of the fertile South London DIY scene. Combining crunching distorted guitars and powerful, driving rhythms with hook-laden melodic pop, their music explores themes of sexuality, gender identity and anxiety. They first burst onto the scene with 2014’s EP Mama’s Boy on the much missed Soft Power Records before releasing their self-deprecatingly titled debut album, We Tried, on Odd Box Records in 2016.

Featuring members of Suggested Friends and The Whooperups, the band have toured extensively, sharing their “riot grrrl-doo-wop heartbreakers” to receptive audiences across the country. Expect to hear brand new tracks, with the release of an as-yet-untitled album set for some point in 2018.

The Cosmic Something is the new solo project from Jemma Freeman, known as the songwriter and guitarist in Bella Union signed dreamy-psych band Landscapes and member of new wave art band, The Fucks.