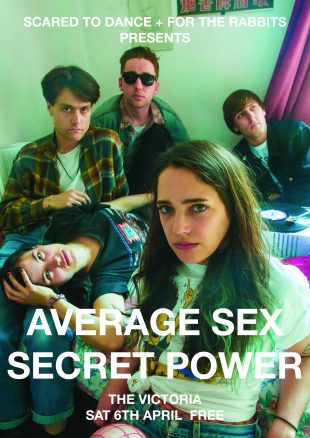 Average Sex headline the Scared To Dance and For The Rabbits gig night on Saturday 6th April at The Victoria.

Entry is free and support comes from Secret Power.

Over the last few years London-based quintet Average Sex have emerged as one of the fastest rising bands on the UK indie-scene. They make youthful, exhilarating power-pop gems, telling instantly relatable stories of finding love, falling out of love and living your best life.

The band have so far shared a pair of well received EP’s on Tim Burgess’ O Genesis Recordings. Their debut Ice Cream EP drew comparisons to the likes of Alvvays and The Shop Assistants and last year’s Melodie EP saw the band tour Europe with The Charlatans.

Formed in 2017 Secret Power have since expanded to a three piece band and honed their live show playing sets around Brighton and London. This year looks like it’s going to be a break-out one for the band, with a slot supporting Big Joanie on their upcoming UK tour, as well as the release of their debut EP on For the Sake of Tapes.

The EP is a showcase of the variety of influences that collide to create Secret Power’s sound; from angular post-punk to girl group harmonies and a love for all things reverby.