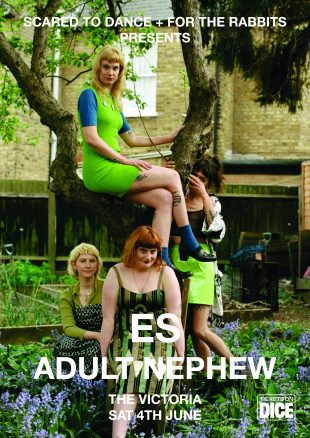 Es headline the Scared To Dance and For The Rabbits monthly gig night on Saturday 4th June.

Support comes from Adult Nephew at The Victoria and you can get your free tickets at DICE.

London quartet Es first emerged back in 2016 when they released their break-out EP, Object Relations on the influential punk label, La Vida Es Un Mus. The record was well enough received to earn them a spot touring with the Thurston Moore Group, and also catch the attention of Upset The Rhythm, with whom the band teamed up for their 2020 debut album, Less of Everything.

Recorded with Sauna Youth’s Lindsay Corstorphine, Less of Everything is a record that feels like a manifesto, a clarion call to re-think ideas of excess both in music and in the world at large. At the heart of Es’ sound is the dynamic between Katy Cotterell’s bass and Flora Watters’ keyboard, the duo combining with Tamsin M. Leach’s precise drum rhythms to create something minimal, dynamic and delightfully intense. Atop it all is the sheer presence of vocalist Maria Cecilia Tedemalm, her sharp, probing voice perfectly delivering her complex lyrical pronouncements, a brilliant combination of drama and sincerity that’s a thrilling delight.

Adult Nephew are a band formed from three late-20 somethings’ love for the noise rock of Sonic Youth, the rhythms of Talking Heads, and the melodic sensibilities of XTC. Adult Nephew will inspire you to exhale a large “Phew!”, as you realise that the adults are taking the stage, and they have all your wildest post-punk dreams covered.