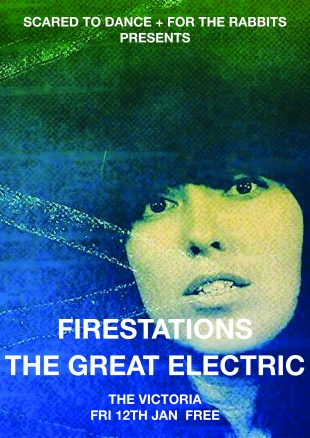 Firestations headline the Scared To Dance and For The Rabbits gig night on Friday 12th January at The Victoria.

Entry is free and support comes from The Great Electric.

This year is looking like a huge one for London five-piece Firestations. Freshly signed to The Pictish Trail’s Lost Map records, the band are set to release their new album The Year Dot. Recorded over three years in their own home studio in Walthamstow, it is very much a DIY-creation, but anything but a lo-fi one, the band’s attention to detail and obsession with finding the perfect sound creating a lush and absorbing listen.

The first new material since 2014’s debut Never Closer, The Year Dot is a record that refines and expands on Firestations’ shared musical vision. Starting with simple pop songs, the band add layers of drones, vocal harmonies, electronica and complex, intriguing rhythms, and create a sound entirely their own. Recent single “Build a Building” is a fine entry to Firestations’ world, a downbeat track about feeling like a cog in a wheel presented with a breezy pop melody and sun-drenched vocal harmonies. With support from Austin Town Hall, The Little Indie Blog and DIY among others, Firestations look on the verge of something very special.

Featuring alumni of bands as diverse as Kenickie, Hefner and Go-Kart Mozart, The Great Electric need little in the way of introduction. Formed back in the winter of 2012, the band recently release their self-titled debut album on the ever-reliable WIAIWYA imprint to critical acclaim. Their first new material in three years, since their debut EP for Static Caravan, it was time well spent on a beautifully crafted album.

The band’s sound is shaped by a shared love of classic German electronic and progressive acts of the 1970s coupled with the pop music sensibilities, hooks and production of 90s groups such as Stereolab, Quickspace, Pram and Electric Sound of Joy – or to quote most reviews they sound a bit like Neu!